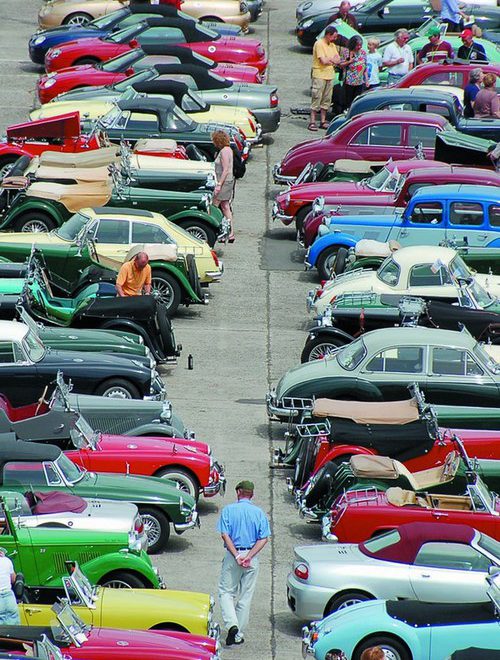 As far as Gert Jorgensen, former European Manager of MG Car Club, remembers, it was an idea of Ton Maathuis (MG Car Club Luxembourg) and John Hale created one late night in 1995, because European members were beginning to travel more between the countries (The UK members did nearly not at that time!) John then went around discussing it with other clubs during 1996, and he also visited Gert on the Als Lobet Camping Meeting that summer, where they discussed the idea of a EEOTY.

John Hale was the MG Car Club European Manager at that time (the first!). Until 1992 there had only been an overseas director covering the whole world. It was Phil Richer at that time. This was changed at the first European Conference in Wiesbaden 31st October 1992.

In the minutes of the conference in Rome 19th October 1996, the EEOTY is mentioned the first time, and it is formerly written to the protocol, that it will be an event to take place every year. 1st meeting should be in Luxemburg 29th-31st August in 1997 and the next in 1998 was already planned than to be in Switzerland 27th July-2nd August.

At the “Mini Conference” at Silverstone in 1997 (13th June) Ton Maathuis, according to the minutes, was a bit concerned as only 80 entries has arrived so far, and it was set up for 250. He was however confident. As far, as I remember it, it ended up in August as completely overbooked!

Since then, the European events have been a big attraction in the annual calendar, inspiring international audiences and a certain flair, as the host country naturally always wants to show its best side. Almost always over 200 MGs from all over Europe, sometimes also from overseas, are at the start. Already in 2007, an EEotY took place in Germany, the event location was Speyer  (Photo: MG-Parking in Speyer 2007).